Born in 1984 in İstanbul, Turkey. She completed her BA in Education and Sociology at the Hebrew University, and has an MA in the field of Philosophy of Education

Read More
from the same academic institution.  She teaches Turkish to both beginners and advanced levels at the Hebrew University.
Read Less 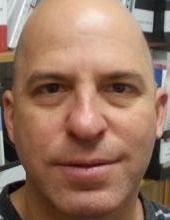 Read More
, specializing in Armenian amulet scrolls from the late Middle Ages. Yoav was a member of the team that discovered a medieval Jewish cemetery in Eghegis, Armenia, together with Professor Michael Stone and the late archaeologist David Amit.

After his studies, Yoav began working in human rights organizations and in the field of applied social research, while keeping up his active interest in Armenian culture and literature in less official ways, as well as publishing articles about Armenian topics. Yoav returned to the Hebrew University in 2012, where he now teaches Classical Armenian language and courses in Armenian history and culture.

Dr. Eliyahu Stern is a teacher, researcher, poet and translator.  He has earned three academic degrees - B.A., M.A., and Ph.D. - from the Hebrew University of Jerusalem

Read More
, where he now teaches Arabic and Islam. Since 1993 he has taught at the Department of Islamic and Middle Eastern Studies. He has taught also at the Rothberg International School for overseas students at the Hebrew University (Graduate Studies- 2000, 2008-2013, Undergraduate Studies 2009-2010), the Arabic Language & Literature Department (1999-2005), the Amirim program for outstanding students at the Hebrew University (2004), and the Hebrew Ulpan (1987-1989).

Dr. Stern has gained vast experience in many different methods of teaching, especially in teaching various levels of Arabic as a foreign language, in the Hebrew University of Jerusalem and in a variety of academic and non-academic institutions including colleges, high schools and MEMRI – The Middle East Media Research Institute. His academic disciplines are religious studies, Islamic and Middle Eastern history, and Arabic language and literature. His fields of teaching and research are Arabic language and literature, Islamic mysticism, theology, and law, and the relationship between Islam and Judaism.

In his Ph.D. dissertation (“Protection from Sin in al-Qushayri’s Thought”, 2010, under the supervision of Prof. Etan Kohlberg) and in his published research, Dr. Stern has studied Islamic mysticism and its interrelations with theology and law, as well as the special poetics of Sufi literature.

He was awarded The Harry Hershon Prize for Fine Literature (1998) for his book of poetry, Crucified Cantor, and he has published poems and translations of Arabic poetry in several books and journals.  His academic awards and distinctions include: The Rotenstreich Ph.D. scholarship, Council for Higher Education in Israel; the S.D. Goitein Award; the Z. Stern Award; a scholarship from B'nai B'rith Jerusalem; the Liebes Award; The Hebrew University’s list of outstanding teachers.